“Woof!” was a big success, it was re-commissioned year after year. Pippin and Judy were the original dogs used but after we had completed four or five series they were replaced by Punch. Here is Punch with my wife, Liza Goddard, who was Punch’s co-star. He was quite extraordinary. He loved doing stunts. Nowadays they would be created by CGI against a green or blue background. Punch did it for real, no trickery. There was an episode in which Stephen Fry appeared. The character he played was a writer but for the purpose of the story the boy, Eric, believed that he was a spy. There was a skylight that looked down into the writer’s office. To get to the viewpoint involved ladders and a perilous trip across two ropes bridging a gap. It was easy for the Eric the boy to cross but a death defying feat for Punch, the dog.

Tineke, Punch’s trainer, started by having two ropes stretched taut just a couple of feet off the ground. Gradually, the height was increased. Punch took it in his stride. Finally, Tineke was happy for him to be filmed. A safety net was rigged to catch him if he fell, the cameras were ready, I called: “Action!” Slowly Punch inched across the gap, a drop of fifteen feet beneath him, and step by step made it to the other side. The crew cheered as Punch jumped up into Tineke’s arms. He was given his reward, his tennis ball to play with.

In 1994 we were looking for a house and went to view a farmhose overlooking Syderstone Common. My wife was shown round the house by the owner’s wife while I was taken to look at the barn and paddocks by the owner. We decided we liked it and made an offer.

A few days later we were having supper with friends and they asked how many dogs we had. I did a quick calculation and replied five. “No, no,” my wife replied. “Six!” My jaw dropped. “There’s Ben.” They had omitted to tell me that the owner’s wife had offered us their dog, Ben, as there would be no room for him at the place to which they were moving.

Ben was a Golden Retriever, who hadn’t been allowed in the house. He had a kennel in the garden, there was a well-worn path leading from the kennel to the back door and that was all the exercise he ever had. It was inevitable then that on one of the first proper walks he enjoyed with us he damaged his cruciate ligament. And as soon it was mended he injured the other one.

He was a lovely old dog and he spent his final years lying in the bag of my wife’s battered old Daihatsu 4×4 keeping watch on the house and farmyard. 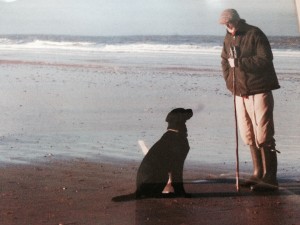 Do you remember my present, beloved dog, Donald? I talked about him in my previous blog. He’s seven years old now. Something very strange happened the other day. A couple appeared on our parking area and handed my wife Donald’s identity disc. A day later, a card arrived from them:

“Dear Cobham Family, My nine year old daughter found the enclosed dog-tag in the woods on Holkham Beach. As it looks as though it may have been there for sometime, my daughter wanted to return it to you as she thought your dog may now have passed onto dog heaven and you may like the tag as a keep-sake. With all our best wishes.”

She signed the letter and left a telephone number. I rang back immediately and was able to re-assure her that Donald was alive and well. He had not gone to “dog heaven.” I was very grateful for their concern and hoped that they would come and see Donald who has now been re-united with his dog-tag.